Absolutely Authentic from A to Z! Rebellious

This word means a completely different thing to me now, then it did about 20 years ago.  I grew up in a home/culture that frowned upon rebellion...I mean really frowned upon it.  I was scared to say something wrong, do something wrong...afraid to rebel.

Then I got to be in my 20's, and now my early 30's and rebellion is pretty much in the forefront of my mind.  I try really hard not to have a rebellious heart, but it is just so much fun!

In my authentic state of rebellion, I just want to be who I am.  I think that means sometimes I have to step outside of the norm....and just rebel.

Want to rebel with me?

What do you want to rebel against? 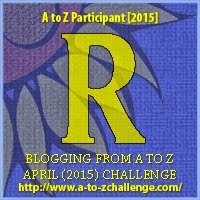 Hi Tanya - thanks for stopping by my blog and leaving a comment - thought I'd visit you in return :) My rebellion is not teaching the way others would have me teach - I enjoy children and the way they think outside the box - I don't want to stifle their ideas so I give them freedom to explore, take risks, do new things, go different places & this isn't always appreciated by those at the top - my priorities are not grades they are LIFE & seeing what an amazing world we live in!
Special Teaching at Pempi’s Palace

Love that rebellion! Thanks for stopping by and commenting!!! :)